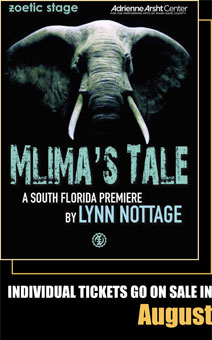 Mlima is a magnificent elephant trapped by the underground international ivory market. As he follows a trail littered by a history of greed, Mlima takes us on a journey through memory, fear, tradition and the penumbra between want and need. From Lynn Nottage, the two-time Pulitzer Prize-winning playwright of Sweat and Ruined, Mlima's Tale is a captivating and haunting fable come to life. 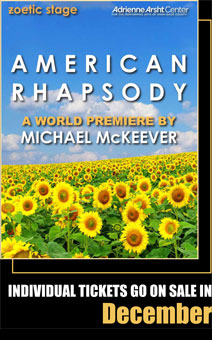 Over the course of some 60 years — starting in 1969 and ending in 2032 — the Cabot family tries to keep up with the world as it evolves around them. Epic in scope yet intimate by nature, American Rhapsody weaves the lives of its main characters through the ever-changing landscape of the American zeitgeist as it speeds through the last half of the 20th century into the turbulence of today and well beyond. As the family evolves into a new America, so does its cultural identity as members of other races and sexual orientations marry into and redefine what the family thought it was. 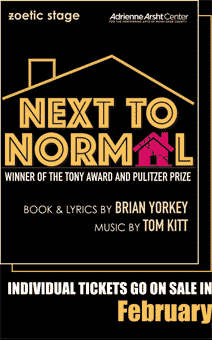 at the Adrienne Arsht Center for the Performing Arts
March 16 – April 9, 2023

Next to Normal is a deeply moving musical that explores how one suburban household copes with crisis and mental illness. Winner of three 2009 Tony Awards, including Best Musical Score, and the 2010 Pulitzer Prize, Next to Normal was also chosen as one of the year's 10 best shows by critics across the country. Next to Normal takes audiences into the minds and hearts of its character, presenting their family’s story with love, sympathy and heart.

Note: This production includes substance use and mental health topics. 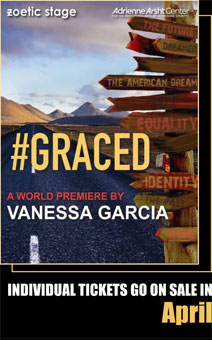 Catherine is searching for something authentic as she embarks on a "Lewis-and- Clark-esque" trip across America sponsored by Monteverde Moonshine with her new lover and colleague, Lewis. Along the way, they pick up a wayward nun named Rosalie who has just gone through deep loss, meet a queer homeschooled teenager named Blake and rummage through the layers of migration and gender inequity that make up America. As Catherine travels, she comes to more questions than answers about "the real America," her own identity and what authenticity even means anymore.